This part of a three part series on STL decomposition focuses on a sketch of the algorithm. It is not a rigorous treatment, but hopefully thorough enough to provide a mathematical understanding of how the various hyperparameters affect the decomposition. This post is a bit heavy on the mathematics. For an introduction to STL, please look at Part I

STL (Seasonal Trend decomposition using Loess) was developed by Cleveland et al. Journal of Official Statistics 6 No. 1 pp 3-33 1990. The core idea is that a time series can be decomposed into three components: seasonal, trend and remainder (\(Y_\nu = T_\nu + S_\nu + R_\nu\)) for \(\nu = 1\) to \(N\) measured data points. The algorithmic details is not commonly discussed in time series texts in part because unlike other methods, there is no notion of a loss function to be minimized. This is because the notional of seasonal variation is always intrinsically ambiguous: whether the temporal variation should be considered Seasonal, Trend, or Remainder is, to a degree, a matter of opinion and determined by choice of model and model parameters. This is true in STL as well as any seasonal variational approach.

The goal is to separate a time series \(Y_\nu\) for \(\nu = 1\) to \(N\) into \(Y_\nu = T_\nu + S_\nu + R_\nu\), trend, seasonal and remainder components. This is done through two loops. In the outer loop, robustness weights are assigned to each data point depending on the size of the remainder. This allows for reducing or eliminating the effects of outliers. The inner loop interatively updates the trend and seasonal components. This is done by subtracting the current estimate of the trend from the raw series. The time series is then partition into cycle-subseries (e.g. if it is monthly data with a yearly season, then there will be 12 cycle subseries: all Januarys will be one TS, all February a second, etc.). The cycle-subseries are loess smoothed and then passed thorough a low-pass filter. The seasonal components are the smoothed cycle-subseries minus the result from the low-pass filter. The seasonal components are subtracted from the raw data. The result is loess smoothed, which becomes the trend. What is left is the remainder. In the outline below, the notation follows the Cleveland paper.

There are six major parameters in the model. The parameter names used in the stlplus package are in parentheses.

In addition to these six primary parameters, the degree of the loess smoothing can be changed, though this is hardly ever needed. The default is typically \(d\) = 1 for all the smoothing. There are more parameters in the stlplus function related to minutia of handling the ends of the time series (such as which cycle-subseries is at the beginning) and some that are related to the computation parameters and (I believe) should not affect the resulting model.

Of all of these parameters, the most important for the modeler to consider are \(n_{(p)}\) and \(n_{(s)}\). The decision of which value of \(n_{(p)}\) comes from what seasonal behavior is wanted to be captured. As shown in Part I, traffic has weekly seasonality, but also monthly variation. If multiple seasonalities exist, it is typically best to handle the highest frequency variations first, then aggregate and analyze the slow variations: e.g. find the weekly variation first. Account for that seasonality and then aggregate to monthly data to look at monthly variations.

\(n_{(s)}\) controls the smoothing of the seasonal data. This plays a huge role in determining what variation is considered ‘seasonal’ versus ‘trend’ or ‘remainder.’ The smaller the value, the less smoothing in each cycle-subseries. This causes more of the variation to be captured in the seasonal component. To see this in action, we’ll look again at the traffic data from Part I.

As a reminder, the procedure for performing the stl analysis is 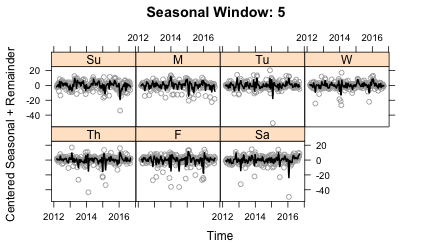 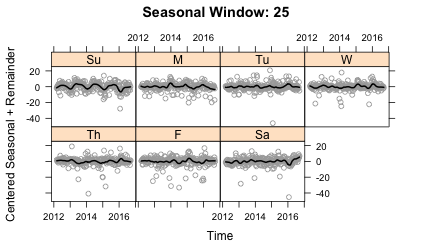 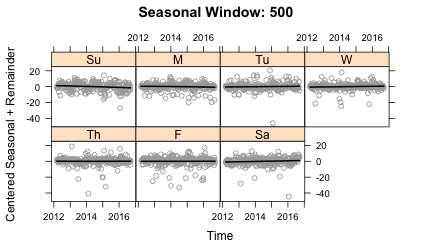 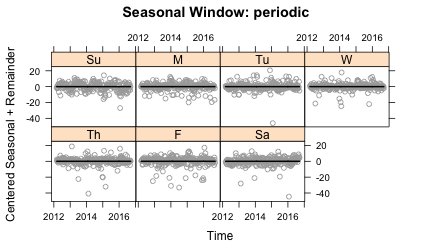 With \(n_{(s)}=5\), there is not enough smoothing to the seasonal component. The line moves too quickly to compensate for changes that should probably be put into the remainder term. \(n_{(s)}=25\) allows for some slow changes in the seasonality, whereas \(n_{(s)}=500\) yields straight lines and \(n_{(s)}=periodic\) gives a constant value. So what is the right answer? This exposes the subjective nature of seasonal decomposition. I personally like capturing some of the variation in seasonality given with \(n_{(s)}=25\). But it certainly wouldn’t be wrong to make a different choice.

I hope this gives at least a bit of a background on how STL works under the hood. The approach I have found best when working with STL is to focus on the \(n_{(s)}\) and \(n_{(p)}\) parameters. \(n_{(p)}\) is determined by what periodicity I am interested in. To choose \(n_{(s)}\), I have to make a series of plots and make the subjective choice of what I want to consider as seasonal.